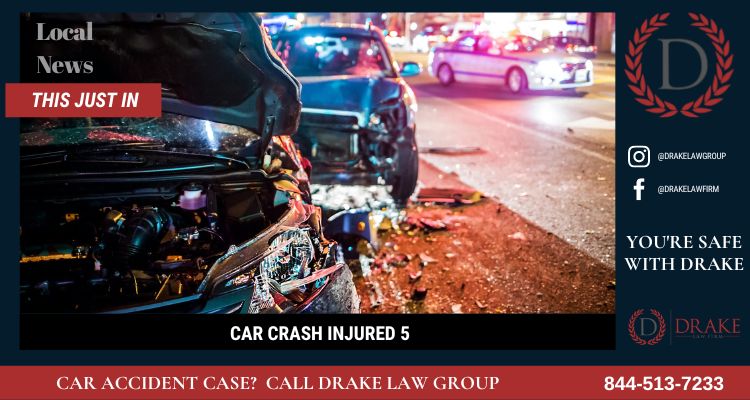 FRESNO COUNTY, Calif. (KFSN) -- A major crash in Fresno County has left five people injured on Saturday evening. One of the victims is in critical condition.

The crash happened after 5:30 pm at S Englehart Avenue and E Parlier Avenue, just east of Reedley. The CHP said a red sedan likely ran the stop sign at Englehart and was hit by a white SUV.

One person from the red car had to be airlifted to Community Regional Medical Center in Fresno with major injuries.Others from both vehicles were rushed to the hospital via ambulance. All are expected to survive.

Firefighters from Fresno County, Reedley, Kingsburg, Selma, and Dinuba, as well as officers from the California Highway Patrol rushed to the scene. Todd Graham lives just down the street. Back in October, he was involved in a crash in the same intersection when another driver blew through the stop sign.

"An older gentleman, he was going home to Orange Cove - he wasn't paying attention and went right through the intersection," Graham said. In that accident, everyone survived.

Graham said he's witnessed several crashes in this intersection. "It would be great if we could get a four-way stop sign on Engleheart and Parlier," he said.

The California Highway Patrol said drivers should be extra cautious on county roads like these.

"Keep a high visual horizon, maintain your speed, don't go over the speed limit.. and look for things that might pop out in front of you so you have that space cushion in front of you to stop," said Sgt. Christopher Swanberg.