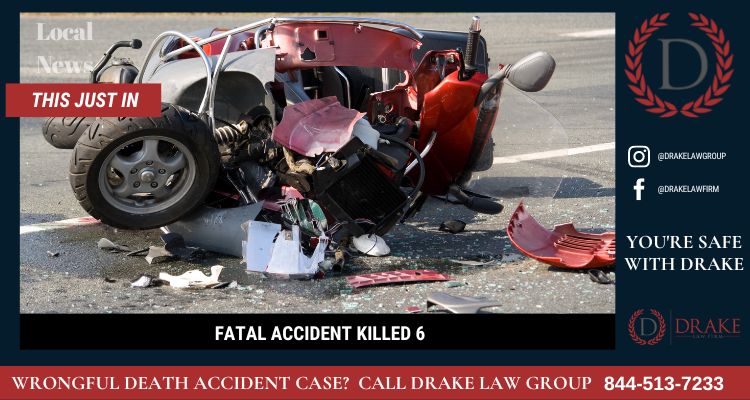 37-year-old Nicole Lorraine Linton is facing vehicular manslaughter charges in connection with the fiery wreck In Windsor Hills Thursday afternoon that killed six people. Linton, the driver of the gray Mercedes-Benz that careened through the intersection of Slauson and La Brea Avenue, was arrested Friday morning as she remained hospitalized.

Six people, including an infant and a pregnant woman, were killed and eight others were injured Thursday afternoon after Linton sped through a red light, causing a fiery multi-vehicle crash. Among the Injured were six kids and two adults, who suffered minor injuries and were transported to the hospital. Another person was treated at the scene.

The Los Angeles County Fire Department initially responded to reports of a fire at 1:41 p.m. near Slauson and La Brea Avenue.

According to the CHP, Linton ran a red light on La Brea Avenue, at Slauson, and crashed into about a half-dozen other cars.

Two vehicles then burst into flames.

The Los Angeles coroner's office Friday identified 23-year-old pregnant woman Asherey Ryan, her son who was a week shy of his first birthday and her unborn child as victims in the crash. The names of the other fatally injured people were not immediately known.

The Los Angeles District Attorney's Office released a statement Friday saying, "My heart goes out to the families that lost loved ones in the horrific car collision that occurred yesterday in Windsor Hills. This incredible tragedy has sent shockwaves throughout Los Angeles and the loss of so many precious lives will have a lasting impact on those that are closest to them."

"Our office is in close contact with the lead law enforcement agency investigating. A prosecutor has already been assigned and will be working with law enforcement throughout the weekend. We will provide updates as more information becomes available. The case could be presented to us as early as Monday."

Debra Jackson, a witness to the crash, spoke with CBSLA.

"All of a sudden, I heard a big explosion...and flames went over my whole car...I though my car was on fire," said Jackson, who was just about to pump gas into her car.

Several people ran through the intersection to help. CHP investigators said some of the victims were thrown from their cars and CBSLA spotted a child's seat in the middle of Slauson Avenue.

A witness to the crash, Veronica Esquivel, said she tried to help the baby, but couldn't.

"I was about to pump gas and all of a sudden, I hear all of the noises from all of the collisions, and then the fire explosion and I saw things, metal and things flying in the air. So, I just covered myself behind the pump," she told CBSLA.

Security footage from a nearby gas station captured the exact moment of the fiery crash.